The following are Dr Jayaprakash Narayan’s responses to a few questions raised on the J&K division.

Q: Should Article 35 A be repealed?

Article370 and Article35A must be repealed.

Article 35A and its variants in other States and regions of India violate the fundamental rights, undermine unity and integrity of the nation, and create impediments to economic growth, investment and job creation. Therefore, repeal of Article 35A and other regulations/provisions all over India restricting rights of all Indians is necessary. It should not be viewed in isolation and the same principle should be applied to all of India. Isolation of regions and communities in the misplaced belief of ‘protecting’ them only stunted economic growth, perpetrated poverty, stifled innovation, retarded cross-fertilisation of cultures and ideas, and weakened unity and integrity of the nation.

Q. Should Article 370 be repealed?

Article370 and Article35A must be repealed.

The provisions of Article 370 were clearly intended to be transitional and temporary. However there are two different sets of issues related to Article 370. Those provisions that spawned legislation like Article 35A are clearly unproductive and dysfunctional in this day and age of global supply chains and disappearing trade barriers. Similarly, the provisions that limit application of fundamental rights in any form, or violate the principles of separation of powers, constitutional checks and balances, universal franchise, democracy and people’s sovereignty expressed through the elected legislatures should be recognised as anachronistic and dysfunctional.

Q. Do you support regional autonomy for Jammu and Ladakh?

Jammu and Ladakh have been seeking regional autonomy. I believe they should have autonomy. The model of autonomy should be discussed: a) it could be regional councils in the pattern of Telangana Regional Council we had until mid-70’s. b) it could be Meghalaya pattern before it became a full-fledged State. I believe similar flexible models should be evolved wherever there are demands/need of that kind. It is best to encourage all stakeholders in a State to hammer out a compromise, and then Parliament must sanctify it as law. If the choice in such cases is between local autonomy and separate statehood, then the contenders will usually agree on a compromise.

Q. What is your view on creation of union territories through unilateral decision making of the Govt?

India is a Union of States. It is a federal country, and a unitary model of a single-tier government at national level making all decisions will be a failure, and will lead to fissiparous tendencies. Therefore conversion of a State into a UT is regressive. Our pattern always has been converting a UT into a State wherever necessary/feasible. A new UT has been created either because of a dispute between States (Chandigarh), or as a transitional measure (North-east, Goa and Pondicherry after decolonisation, Sikkim after voluntary merger with India etc. So far there have been no instances of converting a whole State into UT(s). It is a unitary approach that should be avoided for reasons stated above. And it is unwise to unilaterally impose a solution without taking the stakeholders into confidence and hammering out a negotiated solution. The Union should play a proactive role to reach a solution, but should not bulldoze. NDA under Mr Vajpayee followed this approach before bifurcation of UP, Bihar and MP. That is the federally correct and politically wise approach.

Q. Can you please elaborate on "different model of democratic government". Is J&K, a state with internal and external security complications, ready for it?

Obviously local situations vary in a large and complex country. As long as Union’s constitutional role under Seventh Schedule is intact, and fundamental postulates of democratic and accountable government are adhered to, unity and integrity of India are safe. Union’s meddling in State’s functioning will only make things more complicated and often worse. Regarding different local models, there is no reason why Delhi, through constitutional diktat should decide how the State legislature is elected (our Constitution prescribes an elaborate model as a complete replica of the Union), local governments are structured (73rd and 74th Amendments created over structured, underpowered, largely dysfunctional local governments) or cooperatives are managed(Part 9 B prescribes elaborate mechanisms to manage a coop; at this rate tomorrow somebody will incorporate a chapter in the Constitution on how to run a local club!).

In Kashmir, earlier the Sadar I Riyasat (Governor) was elected by the legislature. Heavens won’t fall if the all States elect Governors just as the President is elected, or if we abolish governors altogether. Until now J&K had a term of six years for its elected legislature. Every State can be allowed to choose the manner of election of executive and legislature, and their term of office within a band, say 3-6 years. There is no reason we should impose by the federal Constitution an inflexible, one-shoe-fits-all approach. No one person has the ability or imagination to anticipate all local needs and contingencies and design a model that fits every situation.

Q. Can we expect to see these new UTs turning into states in the long-term?

I understand that the HM announced that the creation of UTs is only a temporary measure. Parliament has the power to convert a UT into a State. The problem is with conversion of a whole State into UTs. Once we abrogate Article 370, J&K became like any other State, and we should adopt the same constitutional methods and practices. We cannot in the same breath argue for full integration of the State, and at the same time treat it on a different footing; we are actually weakening integration. There are obvious local challenges because of civic unrest; they should be handled the way we handle them anywhere else in India. That is the best guarantor of national integration. Different treatment will only give fodder to other nations to undermine our sovereignty.

Q. Should India be concerned about the reaction of the international community (especially Pakistan, US)?

We are too big a nation to worry all the time about other nations. We should do what is best for our people and our nation. At the same time our own self-interest and global image should be protected. If we are seen as undemocratic or hypocritical, our global influence diminishes. Our actions must therefore reflect our values, and we must take world nations, particularly friendly great powers into confidence, and lucidly explain our stand and actions to the world. Beyond that we should not be guided by wishes of other nations.

Q. Your thoughts on how to resettle Kashmiri Pandits

Legally, the Kashmiri Pandits have all rights and they should be enforced. They have been violently and brutally driven away from their homelands. It is a disgrace and a tragedy that we as a nation did very little to protect the Kashmiri Pandits who are refugees in their own nation. If they go back to their homes, they would have legitimate concerns about their lives and safety in the midst of hostile neighbours. There are probably three options: a) if enough groups wish to go back to their homes and if there is safety in numbers, the government must provide full assistance to them, and provide full protection to their communities as long as it is needed. b). if in their homes there is serious threat to their lives and livelihoods, they must be allowed to choose any location in J&K where they feel safe, and the government at its cost must provide full rehabilitation and fully protect those settlements. c) if some families prefer to permanently settle in other parts of India outside J&K, government must provide full compensation to them for loss of homes, properties and livelihood, and give all assistance needed for resettlement.

Q. What is the way forward for these new UTs?

What happens in the new UTs depends on GoI’s approach to long term solution. The above answers cover some approaches. But we must not forget Jammu region where there has been for long a popular demand for separate statehood/autonomy. That needs to be addressed simultaneously.

The current situation could provide us an opportunity to strengthen unity, promote local flexibility and evolve as a mature federal polity. Let us hope a constructive and healthy debate will facilitate real change for the better.

The proposal to abolish the State of Jammu and Kashmir and create two new Union Territories by a unilateral decision of Parliament is violative of the basic principles of federalism. If the same principle is applied to the other twenty-eight States of India, then India can become a unitary nation by a government’s diktat. This not only violates the federal principle, but also sows the seeds of division, discord, suspicion and fear in the constituent States of India.

Apart from violating the democratic and federal principles, such overbearing centralisation will seriously erode the willing consent that is the basis of the creation of our extraordinary republic. Instead of cementing unity and integrity of the nation, over centralisation and destruction of federal foundations will weaken the republic and sow the seeds of division and discord, and will strengthen the hands of the internal and external forces which are inimical to a strong and united India.

In a federal polity, States should be regarded as indestructible and they should not be abolished, nor should their boundaries be altered without their consent and local compromise. There is a case to revisit our States’ boundaries, but not by central diktat or unilateral decisions imposed on States. Reorganisation of States, restructuring federal polity, strengthening constitutionalism and cementing unity and integrity of the nation should all be viewed as a harmonious whole, not in isolation as matters of temporary expediency.

We need now an insightful and far-sighted national conversation. Knee-jerk responses ranging from triumphalism and naive belief that the recent steps are a panacea, to apocalyptic visions treating any changes in status quo as signs of impending doom are both polarising and counterproductive.

The issues related to Articles 356 and 35A, and the proposal to create two Union Territories in place of the State of Jammu and Kashmir will be analysed by legal luminaries and constitutional scholars in the coming days and months. Almost certainly the Supreme Court will have to hear the matter and give a finality to it.

But meanwhile we must go beyond legal technicalities and examine the issues on three broad criteria:

Based on these criteria the following approaches are necessary to strengthen the republic and enhance the prosperity and liberty of our citizens.

This is an excellent opportunity to strengthen national unity and promote local innovation by allowing local models of governance within the bounds of the principles stated above.

I urge all Indians to set aside partisan differences and examine the complex issues involved with clarity, wisdom and a deep commitment to the future of our great nation comprising one-sixth of mankind. 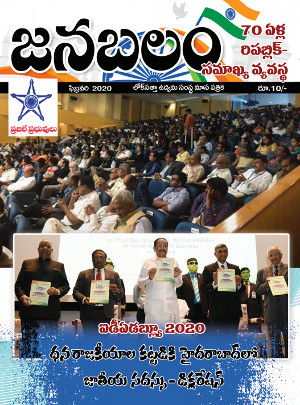