The following resolution has been adopted unanimously to form Lok Satta Party in the Meeting of all district preparatory committee members held on 1st October 2006 at its state office in Hyderabad.

The spirit of nationalism and liberal values on which our struggle for liberation from colonial yoke was founded led to a humane Constitution. The Constitutional goals of liberty and democracy, unity and integrity, peace and harmony, equity and justice, and dignity and opportunity continue to guide our quest for a better India.

In the first phase of democracy after freedom, democratic foundations were laid and new institutions were nurtured with care and foresight. In the second phase, political monopoly gave way to fierce competition and contention for power. The people humbled mighty governments and influential politicians time and again. But even as political players in office have been changed with unfailing regularity, the rules of the game remain unchanged. Our political system is trapped in a vicious cycle. A culture of politics-as-business has taken a vice–like grip of our democratic process. Huge investments in elections – largely to induce or browbeat voters through illegitimate means – to acquire elective office and abuse of public office for private gain in search of multiple returns on investment have become the dominant features of our democracy. Outstanding politicians of integrity, credibility and unimpeachable record of public service do exist in all parties across the spectrum. But such public men and women are increasingly marginalized in our polity. In general, a vast rent-seeking industry has come into existence, making public good an incidental by-product of politics for private gain, not the primary purpose of political activity.

The mainstream political parties have shown some willingness to address this decay in the public domain. Disclosure of candidate details, political funding reforms, limiting the size of council of ministers, strengthening anti-defection provisions, and right to information law are some of the concrete expressions of the resilience and dynamism of our political system in recent years. However, it is increasingly clear that the mainstream parties have neither the will nor the energy needed to bring about far-reaching political reforms.

Even as the decline in our polity continues, newer challenges are emerging. The vast majority of Indians is denied the opportunities to participate in wealth creation in a growing economy. Centuries of discrimination by birth is aggravated by the failure of state to create opportunities for vertical mobility through education, healthcare and skill promotion. Economic growth itself is imperiled, thanks to governance and political failure. The danger of the looming agrarian crisis, resultant rapid urbanization accompanied by high crime rate is complicated by criminalization of politics and partisan control of police apparatus. All these challenges need robust and mature responses from the political and governance system. But the polity, steeped in a culture of politics-as-business and power-as-private-property, is incapable of addressing them swiftly or sufficiently.

It is in this context that many concerned citizens have come to the inescapable conclusion that we need to foster a new political culture, based on internal democracy of parties, transparency in political funding, probity in public life, and robust policy responses to growing challenges. We need to mobilize public support for such a new political culture, and make it viable and sustainable. Only when public support is demonstrated through voting will the mainstream parties undertake the necessary political reforms to transform the nature of our politics. All parties have outstanding men and women whose integrity, competence and commitment are beyond question. But most mainstream parties are currently trapped in a vicious cycle, and such elements are increasingly isolated and helpless in shaping events. Only a broad political movement which can galvanize public opinion and prove the electoral support for clean politics will generate forces for transforming our polity.

In this background, we, like-minded citizens hereby resolve to launch a political Party which will endeavor to establish a new political culture and create new and people-centered politics for a new generation of Indians. Lok Satta Party will work towards specific, tangible aims and objectives listed in Article II of the Party constitution.

Lok Satta Party’s goals are national, and unity and integrity of India are of paramount concern to all of us. The new Party’s concerns will transcend religion, region, caste and language. Lok Satta Party will work with like-minded individuals and groups in all regions and states to build a nation-wide movement for a new political culture. 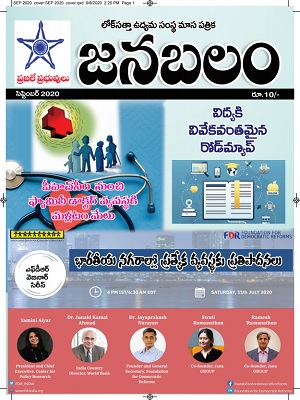