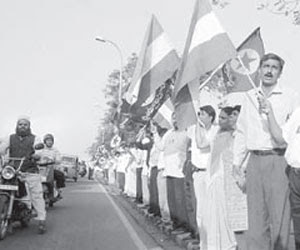 HYDERABAD: The Lok Satta Party today organised a human chain on the Tank Bund to pay homage to people killed in the Mumbai terrorist attack.

Party spokesman Katari Srinivasa Rao and Greater Hyderabad unit president N Ravinder said Hyderabad accounted for 3,000 of the 10,000 terrorists in the country. Police were unable to discharge their duties because of political interference, they charged. 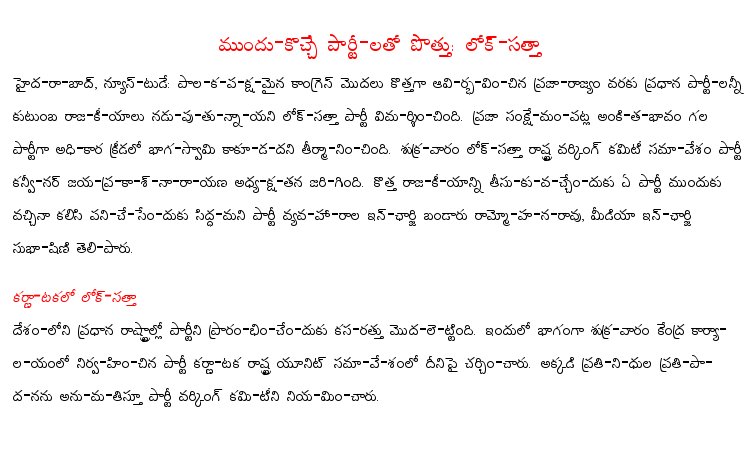 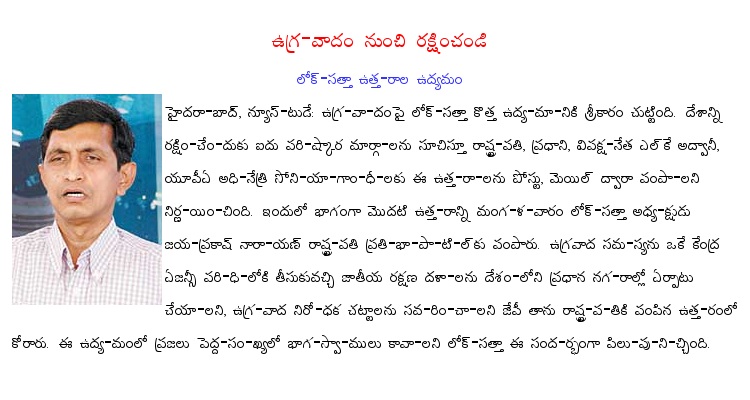 Lok Satta Party president N. Jayaprakash Narayan on Sunday gave a forceful call to the youth and the middle-class people to help bring about change in the present political system by electing truly honest, non-corrupt and trustworthy leaders.

Addressing a press conference here, Mr. Narayan asserted that a question of self-respect and a little soul-searching was posed to everybody now with voters being viewed as purchasable commodities during elections. “Shall this continue? Can’t you bring a change? If you can’t do it now, then you have no right to go on complaining against the system,” he said.

Mr. Jayaprakash Narayan appealed to what he described as good sense of the people, saying that there was no use if the people continued to express surprise rather than act to stop the corrupt politicians.

He advised the youth and the middle-classes to stop “acting” and start doing what was required to provide a right answer to the present ills of polity.

Mr. Jayaprakash Narayan asked the people whether they would prefer to stand as a mute witness to the continuation of a political system that wanted to welcome only those would be able to spend Rs. 5 crore to Rs. 10 crore in an Assembly constituency for the elections. “It is a question whether you are ready for changing this system. The time has come for action,” he said.

Stating that the present political bosses were not ready to change, Mr. Narayan asked whether the voters would not feel ashamed to continue electing such untrustworthy politicians to positions of power in this country. He asserted that it was only Lok Satta Party that brought before the people a unique agenda that provided solutions to all these problems.

Mr. Jayaprakash Narayan felt that the political system seeking to stick to power through electoral corruption was worse than the terrorists who struck in Mumbai. He expressed concern that to a large extent, the terrorists managed to gain entry into the country by offering bribes at every level, which exposed the vulnerability of the entire system.

He suggested making of tough laws even to the extent of placing the burden of proof on the accused so that terrorists would be taught serious lessons. 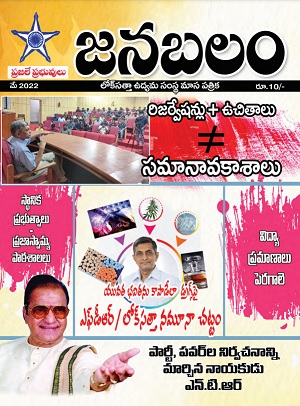