Jayaprakash Narayan takes a leaf out of Gandhiji’s life; says journey aimed at taking politics to the people 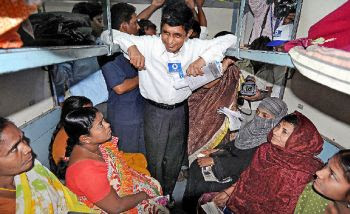 HYDERABAD: It was an unusual scene of excitement at the Secunderabad railway station in the early hours of Friday. With the flags of Lok Satta held aloft, ‘zindabad’ slogans renting the air and the shrill sound of ‘whistles’ (party’s symbol) adding to the cacophony, it was time for an unusual election campaign.

Taking a leaf out of the life of Mahatma Gandhi, Lok Satta president Jayaprakash Narayan (JP) embarked on his simple election campaign tour by boarding the Krishna Express accompanied by supporters and a clutch of media persons in contrast to the pompous campaigns of traditional parties.

What stood out was the enthusiasm of the party workers as well as scores of youngsters who turned up on their own. Lok Satta candidates of various constituencies were present in good numbers to cheer their leader as he explained that the objective of the train journey was to take politics to the people and address local issues wherever the train halted.

People waited to greet him at Bhongir, Aler, Kazipet and other places as the Tirupati-bound Krishna Express stopped briefly at different stations en route.

Travelling in a second class chair car, Mr. Jayaprakash Narayan alighted at all the stops and addressed the gathering on the platform wherever time permitted.

The 530-km whistle-stop campaign tour from Secunderabad to Nellore passed through seven districts and concluded with a public meeting in Nellore.

Mr. Narayan reiterated the Lok Satta’s commitment to decentralise administration and empower people by giving equal opportunities to all irrespective of caste and creed. He assured basic amenities, schools, healthcare centres in every village and developing 1,000 small towns with all infrastructure facilities and employment opportunities to curb exodus of rural people to cities.

He said the Lok Satta would generate 50 lakh jobs by investing Rs. 17,000 crore and agri clinics for every 3,000 acres. He said the people were vexed with corruption and were yearning for a clean and value-based political party.